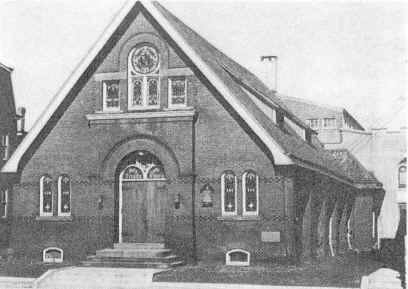 In the 1880s, large numbers of Germans emigrated to the United States. Some left Germany seeking more room and economic opportunities for their families, opportunities that the new factory jobs in Germany were not giving. Others were determined to avoid a new three-year mandatory military service requirement. Some of those who came settled in Chester, Pennsylvania. In 1889, a few of them gathered to form a new congregation, Holy Trinity Lutheran Church. The congregation was the social center for their families. Services were held in German. They first met in a member’s house, and then found a little hall around 3rd and Kerlin Streets for their services. By 1890, a Ladies’ Aid Society and a Young Peoples’ Association had been formed.

Development and change happened quickly. A pastor was called. A new hall down the block was rented. Ground was broken for the first church building, and by 1894 it was ready for use.

At the turn of the twentieth century, the center Chester was a fashionable shopping district that attracted shoppers – the women dressed up with gloves! There was a roller skating rink and there were theaters. The Chester Ferry provided a link with New Jersey. There were many churches – usually reflecting the European roots (Italian, Polish, English, German) of their members. 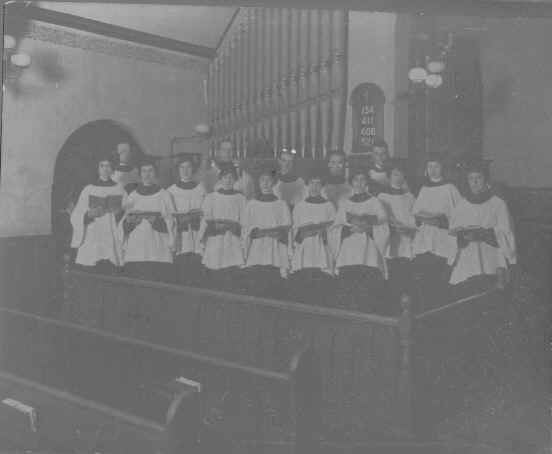 Around 1918, the congregation built a beautiful new stone church building with a big social hall and kitchen. The building included the large granite baptismal font which is now in the garden outside Holy Trinity Church. World War I had brought changes to Holy Trinity, though. One had to do with language. Not long after the war, the congregation started worshipping in English. There was a lot of anti-immigrant feeling in America in those days, and even before the war, President Theodore Roosevelt had warned against “hyphenated Americans.” The language changed, but there was also an evangelical spirit in the congregation, as evidenced by its helping to start two new missions in the area in 1919 – Christ Sunday School in Marcus Hook and Nativity Lutheran Church in North Chester.

Like many congregations, Holy Trinity struggled through the financial depression of the early 1930’s, most of the time barely able to meet the annual budget (in 1936, total receipts were $4651). During this time, however, the men of the congregation renovated the interior of the church and parish house.

When World War II came, Chester experienced the biggest boom in its history. Thousands of people flocked to the city from upstate Pennsylvania and from the southern U.S. to fill the jobs created by the boom in industry. Holy Trinity was right in the middle of the growth. The city’s population grew to an all-time high of 70,000.
The growth also changed Holy Trinity. As the congregation grew, its once large facility didn’t look so large anymore. As members spread out into farther neighborhoods – racial change was a part of what was happening in Chester and some moved away from it – parking on the crowded residential streets became more difficult. Some worshippers began to have concerns for their safety.

In 1947, the congregation voted to sell its property to an African Methodist Episcopal Zion Church. The sale had happened so quickly – the first authorization to sell had occurred only three months before – that the congregation had no place to go. It worshiped at a nearby Methodist church for a while, and then purchased the Allen family mansion (now the Carr Funeral Home) on Providence Road in Wallingford, along with six acres of property. The mansion was renovated for church use, and services were held there for the first time on Christmas Eve, 1948. Ninety-six persons were present.

The congregation took over six years to pay off the loan on the new property and the building renovations. Then it set to work building a church sanctuary. The present facility was completed near the end of 1957. The narrow steeple and clear glass etched windows set the building apart as planned to reach a more modern age.
Activity and membership-wise, Holy Trinity’s peak was in the early 1960s. There were two services, and one year the average Sunday attendance hit 273. Membership grew to over 1,300. Average Sunday School attendance was about a hundred. Church suppers, Boy Scouts, Christmas tree sales, and Strawberry Festivals were community events. By the late 60s, the congregation also began to turn itself more towards those in need in the community. A prior pastor had already left to help form the Chester East Side Ministry. The congregation looked for other ways to be of service. By 1970, the Holy Trinity Nursery School was founded.

Outside the sanctuary, however, the congregation was still dealing with pretty limited space. Sunday School and social events, as well as the new nursery school, were still held in the old mansion. Some of that was resolved in 1975 (after a close congregational vote!) with the addition of a social hall and classrooms adjacent to the new sanctuary. Unfortunately, some of the overcrowding was also relieved by the gradual decline in membership. The congregation would eventually be about 230 members.

Holy Trinity has never had long-term pastorates, and that continued during the last quarter of the 20th century. There were pastorates of six, eight, ten years, and then often a year or two of interim. Lay members, however, along with pastoral guidance, did carry on significant ministries during these years. The Nursery School grew to become a major and well-respected institution in the community. In the 1980s, the congregation adopted Wesley House, a haven for the homeless in Chester, as an on-going project. The congregation sponsored a refugee family being resettled by Lutheran Children and Family Service, and supported work done at Chester East Side Ministry. It gave financial support to various Southeastern Pennsylvania Synod projects and ministries.

People who have been in the Wallingford area since the late 1990s also know Holy Trinity as the “church that had the fire.” A mentally challenged man who lived in the woods behind the church set the church on fire one night in late 1998 and did significant damage to the office area and sanctuary. The congregation worshipped in the social hall for 18 months. In the end, however, the building was rebuilt to its former beauty, and even with a few needed improvements.

The beginning of the 21st century has brought new promise. New people, especially families with young children, have been coming back to Holy Trinity. Forty-six new members were received in 2006, and the congregation has begun to use the strength of its long history to look for ways to be of service in the future.